The design of the C.O.F. system 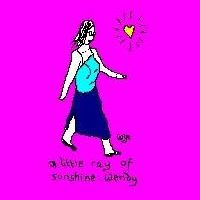 The design of the C.O.F. system

Getting density and velocity right in any given system provides more 'true to scale' units.  But in place of a time unit, we select gravity as the additional base unit.

The measure \( v/g\) velocity/gravity = time, is chosen to keep gravity as unity, and the velocity as in the human range.  This table gives the present common velocities, the velocity and the derived length as (velocity)^2 / gravity.


Although the units are small, the system does not produce large numbers.  The length is shorter than the cm (of CGS), but the velocity is some 30 times faster.

In the second table, we give the day divided into powers of 12, and the distance travelled at the speed of one kine, with names in the 'yard' style metric, and as common names.

Although the metric system makes use of 'square length', the present system will use a comma-unit, making the acre = 1000 sq yards.

The acre is derived in the traditional English way, being a rectangle of width 4 rods, and a length of 40 rods (or a furlong).  But a rod = 3 yards make these 10z yards wide and 100z long, or 1000 sq yards.  A square yard is then a milliacre, a square mile is a kiloacre.

Volume refers to geometrically derived measure.  In metric, this was the Stere, or solid measure for firewood, landfill, and irrigation water.

Capacity is poured measure: that is, what one derives against a graded vessel.  The quantity can be measured by weight or by volume, the former practice with grains, fruit and coals, was by measure, but the advent of effective scales made weight the option.  One sees the weight of a bushel of this or a bushel of that.

Liquid capacity is still by volume, it is easier to measure by flow or graded vessel than to weigh it.  Note that aeroplane fuel is weighed.

The unit of capacity is taken as a cubic hand, or Litre.

The units of weights are derived in the first instance as a cube of water.  This specifies that the specific gravity of water is 1, or alternately the density of water is 1 spig.

The original weights and measures specify currency, against the value attached to a weight of silver or gold.  This was the order of the day well to the second world war.
wendy.krieger

The idea of setting constants like \(g\), \(\rho\), and \(j\) to one, is that the same unit functions for different scales of measure.  These already form name bridges without invoking a coherent system.  That is, something like a pound of force, or a foot of pressure are already with meaning, the first \( \mbox{lb}g\), the second \( \mbox{ft}\rho g\).

The third of these measures, from what I can trace, occurs in Pendlebury's TGM.  It sets the unit of heat \(jM\Theta\) equal to mechanical and gravitational energy.  When James Prescott Joule first measured the mechanical equivalent of heat, it was that to raise a pound of water by a degree Fahrenheit, is equivalent to raising it 778 feet against gravity.  That's about a furlong.

Heat, then is something acquired mechanically over hours.

The usual formulae to derive electricity, is either Ampere's relation or Coulomb's equation.  The prototype definitions suppose a number N, whereby

Biot wrote:The (current), is that current, that when flowing in each of two wires of negligable cross-section, and seperated 1 (length) apart, creates a force of 2/N (forces) per (length) of wire.

Franklin wrote:The (charge) is that charge, when placed at each of two points, one (length) apart, exert a force of N (forces) on each other.

The '2' in the first equation is a result of an integration, that the surface area the curved wall of a cylinder is twice the enclosed sphere.

These have a dimensional analysis of an biot = \(F^{\frac 12} \), and the franklin = \(F^{\frac 12} L\).  The relation of Fr / Bi.s  has the dimensions of velocity, this is one of the velocities that Maxwell compared the speed of light to.  It represents the electrostatic charge delivered by a magneticly measured current over a period of time.  It equates to C=N (Fr/Bi.s), where C is the speed of light in L/T.

These constants are generally not base-free, because to get suitable-size units, one must set C/N to be a smallish number, and thus N by preference is a very large power of the base, eg 12^8 or 10^7.  Even so, eliminating this measure by setting c=1, brings similar problems into the electro-dynamic theory favoured when setting c=1.

Setting c=1 removes the constants here, the resulting system being the Heaviside-Lorentz-theory as an electro-dynamic theory.

One of the interesting things here is that the capacitance of parallel plates is \( C=\epsilon_r A/c D\), where A is the area and D the distance between them.  If these are measured in light units, (ie ct), then C=A/D is the formula.  Since light-units are also something that people think in terms of for how long a signal takes to move a distance, this means the same scale of HLU-like formulae works here too.
wendy.krieger

These are rules that were taught to engineers at the turn of last century.  The two concentrated on that one could only cancel out units of the same name, but they were implemented differently.

The results are the same, but in the second calculation, there are things to cancel.

The main advantage of this is that it is easier to get an estimate of a size in an appropriate unit, than some hundreds of smaller units.  One would measure distances on foot in a known 'hectometre', than to multiply 'metre' 100 times in the ground.

2. Rationalisation
The setting of a proportionality constant of some force law to involve a term containing the mathematical constant pi to correct for the surface area of the region through which the field is passing is called rationalisation. It is associated with the name of Heaviside. A rationalised system need not be symmetrical in the electric and magnetic aspects.

https://en.wikipedia.org/wiki/Centimetre–gram–second_system_of_units wrote:Note that of all these variants, only in Gaussian and Heaviside–Lorentz systems \(\alpha _{L}\) equals \(c^{-1}\) rather than 1. As a result, vectors \(\vec {E}\) and \(\vec {B}\) of an electromagnetic wave propagating in vacuum have the same units and are equal in magnitude in these two variants of CGS.

Symmetry of the electric and magnetic aspects is associated with the name of Lorentz and may be linked to relativity.
It seems that a simpler version of the system-independent versions of the equations of Maxwell would happen when \(k_C\), the Coulombic force constant, and \(α_B\), the Biot–Savart force constant, are equal to the reciprocal of 4\(\pi\), though such versions may not be the most realistic for conditions such as for media that are not empty free space or vacuum, in which case properties such as the dielectric of the medium could be included, or the velocity of the current if it is not near the speed of light. Could it be that a ratio of the constants \(k_C\) and \(α_B\) should more realistically be the velocity of the current rather than one distance unit per time unit? Might the magnitude of \(k_C\) be set to \(c/4\pi\) and the magnitude of \(α_B\) to \(1/4\pi\), or rather \(k_C\) as \(1/4\pi\) and \(α_B\) as \(1/4\pi c\)?
wendy.krieger

The formulae used at the Wikipedia are unnecessarily complicated, in reality, there are simply two variables you add to SI to produce all other systems.  I use three, but this shows the use of the rationalised and unrationalised systems fairly.

There is no such thing.  Coherence is a relation between a set of units and a body of formulae.  There are books on engineering to which the gravitational systems are coherent, and SI isn't.  Of course, the theory that we're setting here does not affect coherence.

This can be treated in dimensional analysis, for which SI treats as a dimensionless group.

wendy.krieger on Tue Sep 17, 2019, https://dozenal.forumotion.com/t23-pendulum-system#90 wrote:I still have not figured out a worded definition for Z_0, since it is not an electrical resistance.

Bill Hall has used this symbol Z_0 for what was called impedance.

Bill Hall, May 20, 2012, #1, https://www.tapatalk.com/groups/dozensonline/new-system-idus-t629.html#p22010826 wrote:The base unit for electrical units is impedance. This is unlike SI which uses current as its base unit. The unit of impedance is called the Heaviside which equals the impedance of free space (Z0). Due to speed of light being set to one (by a factor of twelve), the permittivity of free space (Îµ0) and the permeability of free space (Âµ0) equal one (by a factor of twelve).

If the SI is only singly symmetric yet there is not much of a problem with it its units being used in the main metrological system in the world, then being doubly symmetric may not be crucial for the design of electromagnetic units.
wendy.krieger

The practical electrical units date from the 1860s, and replaced various units like "1 mile of #6 copper wire", or a "German mile (8236 yd) of 6 mm Iron wire" or a 'foot of #26 silver wire'. They were chosen to be decade-multiples of the metric e.m.u., nearest Wm. Siemens unit of 1 metre of section 1 mm², of mercury, and the voltage nearest the Daniells cell.

Various national units were implemented to get as close to these stated units, so you have the BA volt (UK), and the Legal volt (Germany), and various other volts, until they decided to replace the different standards by an international one. Such is the international units.

The only reason that the ampere came to be the base unit, is that it was the first one that one could write it in a way suited for legislation. That is, it is the description of an experimental state, without the underlying theory attached. The actual definition defines a constant that I write \(\mu/\gamma = 10^{-7} H/m\), but you can't say that in an act.

The measure \(Z_0\) is indeed called 'vacuum impedence' for no better reason that it has the units of electrical impedence in SI units. However, in SI, it's 376.730 Ohms, whereas in the pre-SI system called the MKSA, it's 29.979 Ohms. It involves the same 4pi that appears in the value of \(\mu\) in SI units. You can't measure it in a circuit with it acting as an impedence or resistance.

The reason for implementing the various constants in COF, is that you allow calculations where they are equal to 1. The design of C.O.F, by setting \(\mu=\epsilon=1/c\), does not bring a huge advantage that setting g=1 does, but it becomes more apparent when you set c=1, then these two constants also disappear.